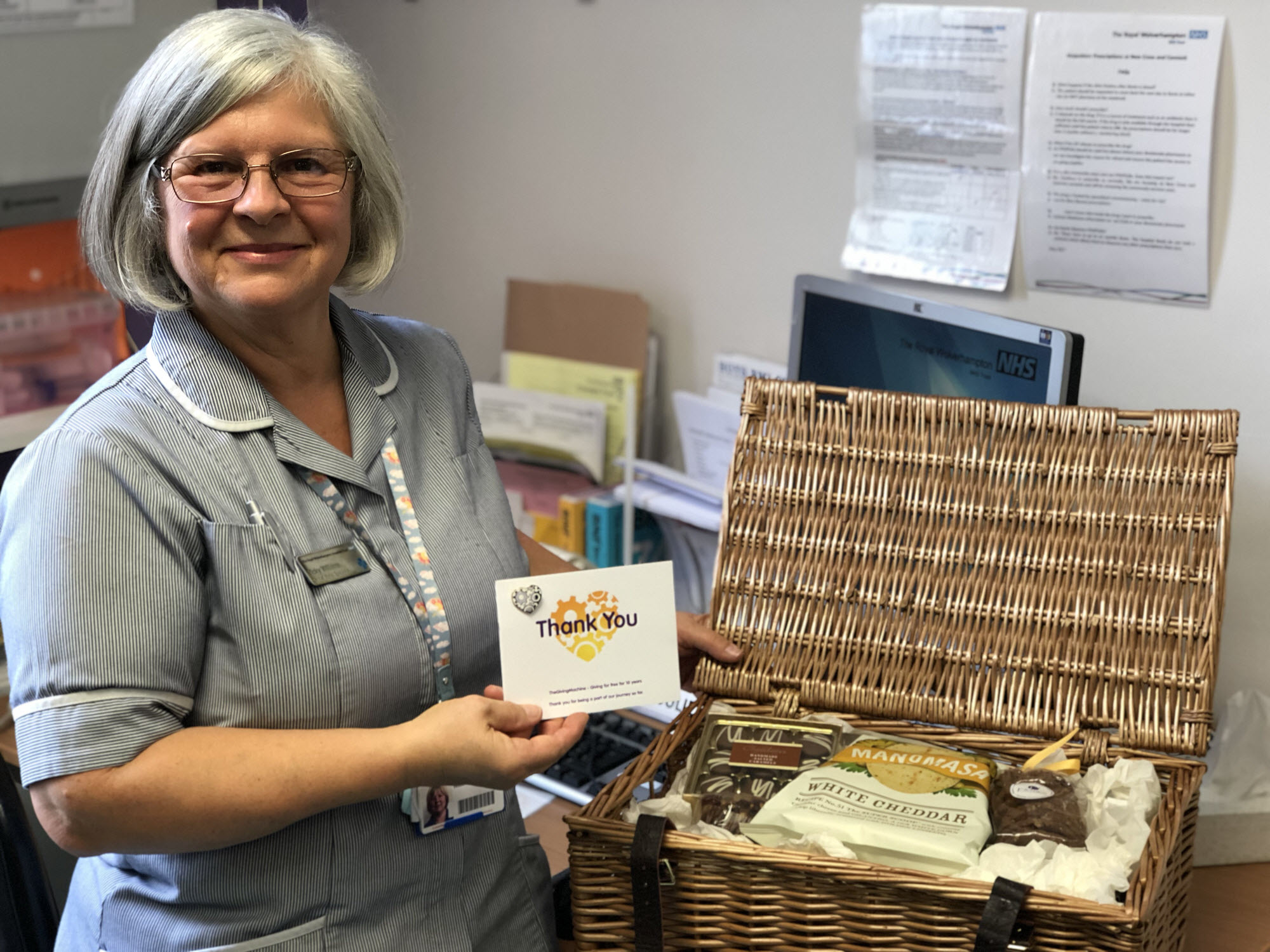 Richard Morris, CEO and co-founder of our award-winning charity, made a visit surprise to reveal the winner and present the award for TheGivingMachine 2018 Community Hero on Tuesday 16th October to Vicky Williams.

We ran the Community Hero Awards to celebrate the many unsung heroes throughout the UK doing so many varied and wonderful activities that make such a positive difference to their communities.

As there could only be one overall winner, a shortlist of ten people was put to a public vote. After all the votes were cast, Vicky Williams a Cystic Fibrosis nurse was a decisive frontrunner.

To congratulate the winner in person, Richard Morris liaised with the person who submitted the nomination to arrange a surprise visit to present the Winner with the award and a hamper which was kindly donated by John Lewis and Partners.

With the help of Kerry, who nominated Vicky for the award, arrangements were made to surprise Vicky in her ward at the New Cross Hospital in Wolverhampton. The surprise presentation was also attended by the Mayor of Wolverhampton and members of Vicky’s proud family.

“Vicky goes above and beyond for her patients on limited staff has a close connection with the families and gives total support, loves her job and shows it. This Cystic Fibrosis Nurse will look after the children until they reach adulthood even those that are unfortunate to make it to adulthood. She even came back from retirement to be there for those children and families. She is always looking for ways to help and support the poorly children a very determined and loving individual”.

“Clearly an inspiration to so many people and I hope she’ll feel the appreciation and affection they have for her with this award.  All the other nominees should be also celebrated as community heroes, so we’ve collated their stories into TheGivingMachine 2018 Community Hero Yearbook for everyone to enjoy.” Said Richard Morris

TheGivingMachine is the charity that enables you to give for free to support your favourite school, charity or community organisation – every time you shop online from over 2,200 retailers.

Why not join now?

By unlocking free cash, we enable supporters to generate a recurring income stream for schools, charities and other social organisations with a small change in behaviour.  With over 7,500 causes registered and raising money via TheGivingMachine we impact schools, pre-schools, Scout groups, small local charities alongside the well-known national charities such as Cancer Research, NSPCC and the Alzheimer’s Society.

Every year online shops pay hundreds of millions of pounds in sales commissions to other websites for referrals. People search for a product or service on the internet, or maybe visit a comparison website, click on a link and then make a purchase. In many cases, they generate a sales commission for somebody else, but in the case of TheGivingMachine, we collect and convert those commissions into free donations for causes chosen by the shopper. And being a charity means we can give the causes the highest % possible. This is currently up to 70%.

The Giver can choose to support up to four causes at a time, with a percentage split of the money distributed to each one. Any non-profit UK cause whose primary purpose is for public benefit can join for free with regular amounts building up to generate large amounts over a period of time.

We want giving to be possible for everyone. Up until now, giving to charity has often depended on whether you can afford it, by taking away this financial barrier, giving becomes a positive behaviour choice rather than a financial or guilt-based choice. This also gives smaller organisations a wider audience reach as they are asking for a favour rather than money.  More giving benefits us all – companies, customer and communities together.

Our members decide who benefits and so far we’ve generated £1.5 million for over 7,500 causes and it has not cost anyone a penny extra.